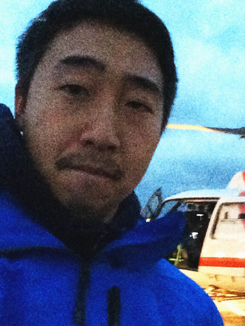 
A master of his craft, a stand-out filmmaker and an authentic global perspective - Hiroki Ono is one of the few Japanese directors ticking all the boxes. Blending authenticity and beauty in every scene to unrivalled effect for films people never forget. Internationally, Hiroki is best known for the “Samurai in Brazil” work, which was created for Nissin Cup Noodles and proved a runaway viral success, as well as the more recent and moving ”Motorbike” for Amazon Prime.
We join Hiroki for his take on a childhood interest in film, the longing for Hollywood that spurred him to study abroad, his experience working in production and how all these factors have influenced his filmmaking style.

Tell us about your background. When did you decide to pursue a film career?
— Ever since I was a child, Japanese special FX movies like Godzilla and Ultraman particularly appealed to me, thanks to my dad’s influence. Learning how miniatures and special effects were made fascinated me more than the film itself, so I read a lot of related books and set my heart on becoming a film director, since the lower grades of elementary school. Once in junior high, however, my focus switched slightly to storylines and I considered becoming a scriptwriter or director.

You studied film at the University of California Santa Cruz. What convinced you to study outside Japan and what sort of impact did that experience have on your work?
— At the time, there were not many schools in Japan where I could study film and I had always wanted to learn filmmaking in the US, given my admiration for Hollywood movies. I also wanted all the other experiences that come with studying abroad. UCSC specializes in scholarly, documentary-style and experimental films and since I had only watched films for entertainment before enrolling, it broadened my horizons. Instead of teaching Hollywood-style production based on role division, many UCSC classes let you produce, write, direct, film and edit by yourself, which meant I could learn all the basics of filmmaking there. The self-starting ability this gave me is what underpins my film production even now, no matter how many staff I work with. Interacting with such a range of global cultures and mindsets at university also brought home to me how to convey stories that were universal, instead of from a Japanese perspective.

What is/are the main difference(s) between the Western and Japanese ways of visual storytelling?
— To be honest, I see less of a difference now than previously, with such a variety of films around. With Japanese advertising, however, I think the limited length of commercials means the script and title tell more of the story than in overseas commercials. I also think each country handles comedy and reacts to exaggerated acting in its own way. Likewise Japan, with a unique home-grown sense of style.

Your works have been honored with awards, not only nationally but also internationally, including at Cannes, Adfest and Spikes Asia. What do you consider your strong point and what makes you stand out in the global market (as a Japanese director)?
— I’ve never really thought about it but I guess my strength is in my ability to make films of world-class quality, over and above a purely domestic perspective.

After returning to Japan, you first worked on the production side before becoming a director. How has that background influenced your directorial work?
— When I first joined AOI Global, my job centered on sourcing overseas works, which gave me access to many Cannes award-winning works and other acclaimed commercials from overseas. We also saw numerous reels from overseas directors, DPs and editors, all of which was very stimulating. This experience marked my entrance into the study of advertising so the way I picture advertising personally is not in terms of Japanese commercials but rather works like the award-winners at Cannes. I was also involved in the planning process with agencies and worked with production managers as a translator. These insights into advertising production from a range of perspectives mean I can direct while remaining on budget and produce work that also reflects the agency goals.

Many of your works are filmed documentary-style, bringing out all the delicate emotion of the characters for the viewer. Are there any particular methods you use to get the cast acting naturally?
— It depends on whether the actors are amateurs or professionals but regardless, what I try and do is create a realistic situation to bring out a natural performance.

You also make humorous works, like those for Spotify, Nippon Steel and Converse, as well as interactive works like Google Chrome: Hatsune Miku and SOUR “Utsushi Kagami.” Do you like working on various types of film?
— Of course there are certain genres I prefer but if I only ever did the styles I am best at, I would never improve. It would also bore me, so I want to keep tackling different styles.

Where do your ideas come from? Do you jot them down in a notebook, or do they come off the cuff?
— I think experiences are what spawn ideas - what people have seen, movies, music, art and all the other things we absorb. When I lack inspiration, I like to ponder things while walking around. When I have time, I may take over two hours to walk to the next meeting.

What is your most memorable work? And can you give us the lowdown on how it came into being?
— When I started working on the Hatsune Miku film for Google, I actually had no idea of what Hatsune Miku was. As I started researching and interviewing junior-high and high-school students though, I noticed how they were pigeon-holed as “Otakus” (*nerds with manga and anime obsessions) and how this bothered them. To combat this, I went into production, determined to make a commercial that would make heroes of these kids at their schools when the work emerged, by depicting Hatsune Miku as a cultural icon. The finished work transcended all my expectations in terms of generating a global buzz and right to this day, the film is still celebrated and cherished by Hatsune Miku fans. It also taught me that if you make a film with the right motivation and ambition, it has the potential to become a special work that goes above and beyond the realm of film technique alone.

Do you have any plan for the future? (Any new things you want to try?)
— I want to try feature films.